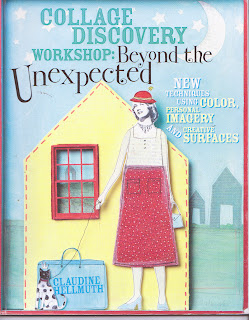 I have had this book since 2006 and frequently look at it but have not really tried out her style.
It is  is fine to take inspiration from another artists style but it's important to acknowledge them.
This is one of my favourite mixed media books, I recommend you buy it if you don't already have it because it will change your mixed media life.
As you can see because of my holiday at the beach,  I have a bit of a caravan obsession.
I feel like making art about women in the 50's caravaning with their dogs and cats.
I love the idea of caravans the smell of them, the confinement, the fact that there is no housework to do and the fact that they creak when you walk in them.
As a family we always went to our bach at lake Taupo or camping beside lakes,
so we never really had many caravaning experiences, which probably was a good thing due to snoring.
Whenever I can I get away to the sea because I love its refreshing energy.
Often I go away to Tauranga for an art weekend retreat and hire out a cabin which is almost a caravan. 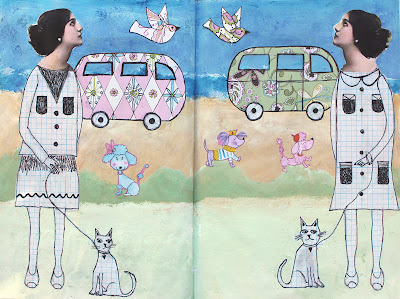 I love watching different people arriving to the camping ground at Ohiwa in their motorhomes, seeing them cook their dinners on camp ovens and eating to the sight of the setting sun over the pounding sea.
Sausages and lamb chops smell  divine on other people's bbq's don't they?
Why does food always taste better outside? 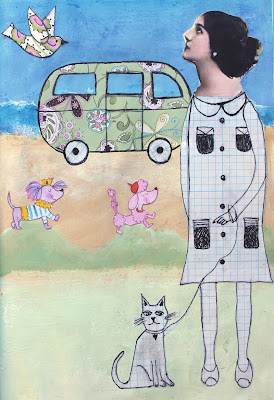 At Ohiwa people are able sometimes to bring their dogs and cats to the camping ground in off season. While I was there a young grey and whitecat adopted me.
I was so sad to leave him behind. 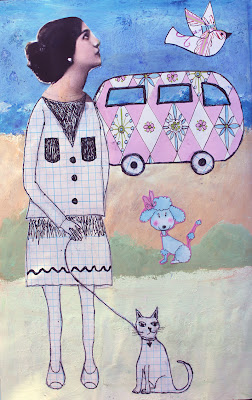 I'd love to have a motorhome and go adventuring around New Zealand, but I'd have to take my cat, and also have some sort of portable studio so that I could paint and write poetry every day as well as manipulate photos in photoshop on my laptop.
One day Graham and I are going to hire a campervan and see if we like it.

We will  be able to sit in the middle of the road and hog it  like Mr and Mrs Magoo and watch people zoom by in a rage past us while we are only going 80Kms an hour.
What fun.

I could do some illustrations about road hogs. 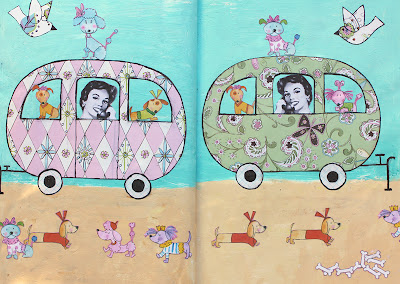 What's the latest camp gossip and have you seen my poodle? 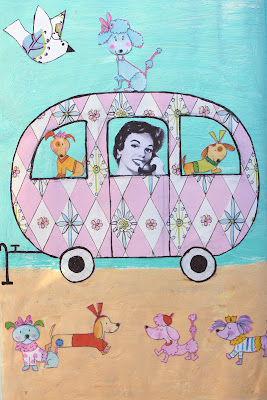 Where are all my dogs? 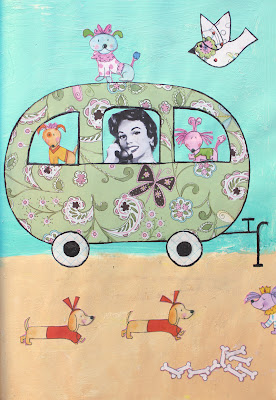 Who ate all the dog bones?
As an illustrator I think it' important to have a number of styles you can experiment with.
I get bored easily so I need variety.
I am going to force myself to do 20 paintings in this style and if it's not driving me mad, 20 others.
Watch this space.... 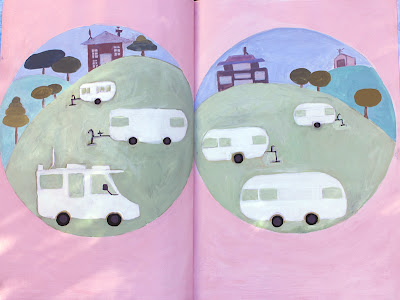 This is the background to a piece I haven't finished yet.
Its like looking at a caravan scene through binoculars or a camera lens.
I'm almost tempted to leave it like it is, maybe I will, afterall less is more isn't it. 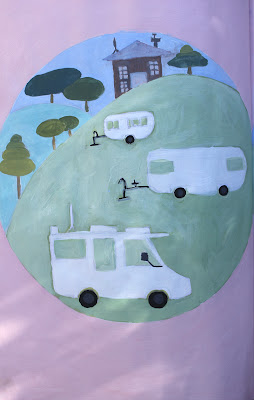 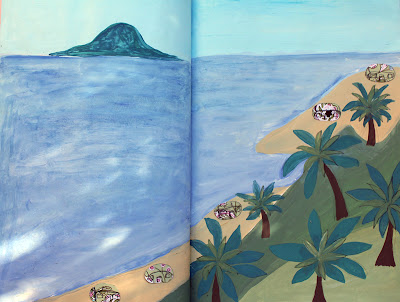 This is an aerial view of caravans on the beach, it is a background so figures are coming in some time soon.
Maybe figures in a boat fishing.
Putting them on the blog I can see mistakes more easily.
For instance there is something wrong with this island, it will need to be smaller and less intense.
Caravans on a hill, background, at the moment they look like eastereggs.
I'll show you the finished illustrations on a later blog post. 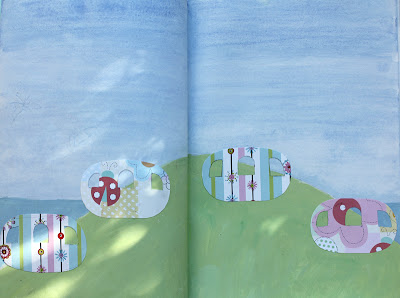 Because of all this royal wedding publicity I have suddenly developed a cupcake and high tea obsession.
I am dying to make a scene with women with crowns on their heads tucking into cucumber sandwiches, cup cakes on plate stands and passing food to their spoilt pooches and indulged cats.
Creative quotes of the day
Faith is an oasis in the heart which will never be reached by the caravan of thinking.
Khalil Gibran

“Friends are like cupcakes in my pantry of memories.”
- Anonymous

I love Claudine's style, and you have done some wonderful collages! I am always delighted to see your latest work. 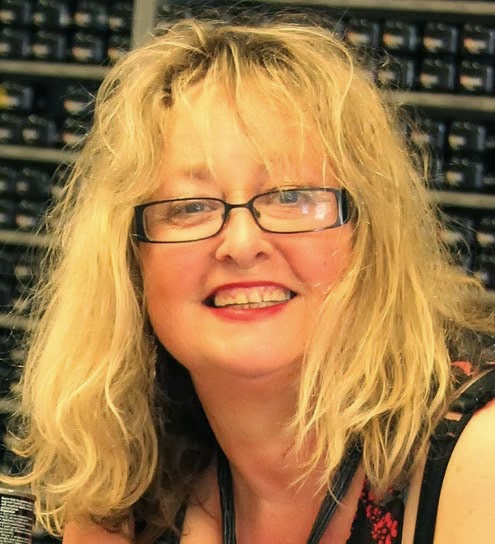